Junction 8, is a popular shopping mall for families located right next to Bishan MRT interchange. there is a wide variety of entertainment & retail outlet available. Few Anchor Tenants included NTUC FairPrice, Golden Village & Best Denki was there since open.

Formal Shunfu Ville was sold for S$638 million on Thursday (May 19), marking the third largest en bloc by quantum here. Each owner of the 358-unit condo, which lies less than 310 metres from Marymount MRT Station, stands to get around S$1.78 million. It is buyer Qingjian Realty's first en bloc purchase in Singapore since it began developing projects in Singapore eight years ago, and it succeeded with an offer that was below the reserve price of S$688 million.

The 358-unit project was first put on sale in September with an asking price of at least $688 million or $791 per sq ft (psf) per plot ratio. The tender closed last October with no formal bids but two letters of interest. It was relaunched for tender at the same price in late January.
The last collective sales of this scale were of the former Farrer Court for about S$1.34 billion and former Leedon Heights for S$835 million, both in 2007.
Shunfu Ville, built in the late 1980s by the former Housing and Urban Development Company (HUDC) and privatised in 2013, sits on a 408,927 sq ft site with about 70 years left on its lease and a plot ratio of 2.8.
​

built over one thousands units after en-bloc

The site can yield about 1,204 units with an average size of 1,000 sq ft, while break-even cost could be about S$1,250 psf, with new units fetching S$1,400 to S$1,500 psf, marketing agency JLL said.
Property consultants said Qingjian's bid was a sign of returning interest in en bloc opportunities owing to limited land banks on offer here, especially as the Government had cut back on its land sales programme.
"Property cooling measures and the Additional Buyer's Stamp Duty on developers if they cannot complete and sell all units in five years have meant that the collective sales market has been very quiet,"Knight Frank's research head, said. "Developers are not willing to take up more risks especially for larger investment deals of above S$500 million." 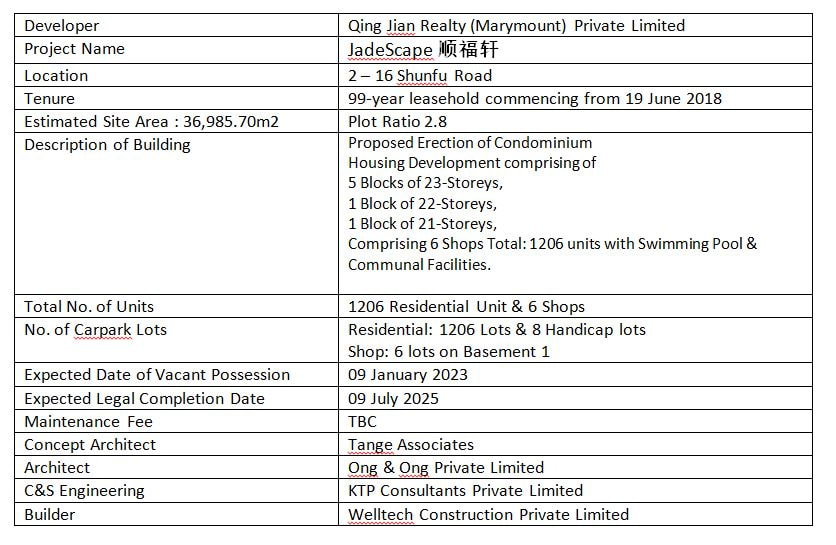 BENEFITS OF REGISTERING FOR THE VVIP PREVIEW:
Be one of the first to experience!

Register your interest for VVIP Preview on 31 August 2018 and receive your exclusive invitation to view our sales gallery!

Just email us if you would like to be kept updated on JadeScape Residences as more details Coming Up.